In 2013 it was in Incheon, S. Korea. In 2016, it was in Manila, Philippines and this year 2019, it happened in Chiang Mai, Thailand. The 13th Triennial Convention of the Asia Missions Association was held in Thailand last November 11-15, 2019 with the theme MIGRATION AND MISSION taken from Acts 8:4.
Chiang Mai City, a Buddhist city with a population of 1 million hosted the AMA Convention for this year under the First District of the Church of Christ in Thailand.
Delegates from Asian countries of Nepal, Pakistan, India, Bangladesh, Philippines, S. Korea, Indonesia, Malaysia, Singapore, Taiwan, Thailand, Myanmar, China, Hong Kong, Japan, Vietnam, Bhutan, Sri Lanka, Laos and Cambodia came to participate and present what is happening in missions and migration in their respective countries. Participants from the USA, Australia, New Zealand, Germany, Brazil, Nigeria, and Ethiopia joined to share their experiences and knowledge on migration and mission to their Asian brothers. Many delegates have met again after three years in Manila, others, have joined because they have important things to share, while some converged in Chiang Mai to learn and be inspired. The opening of the convention was like a big fellowship of people of different languages and cultures worshipping the Lord in music and feasting on His Words!
This year’s convention presented and discussed how God uses His people for His mission in the midst of migration in its plenary sessions. The participants also discussed through various workshops about effective partnerships and cooperation among churches in Asia and across the world that can be formed in the age of migration.
The Asia Missions Association consists of national missions associations in Asian countries. The AMA has hosted triennial conventions in different Asian countries since 1973. Each convention ending with resolutions and action plans have contributed in uniting the Asian churches and mission agencies for the advancement of the Gospel.
For the 13th triennial convention, the Convention committee chose Migration and Mission as its theme because one of the characteristics of today’s changing world is globalization and the frequent migration of the people. A variety of causes including business opportunities, better education, overseas employment, and wars lead people to migrate or relocate. These people maybe referred to as migrants, immigrants, asylum seekers, foreign students or diaspora. They are currently the most receptive targets of mission and potential missionary forces to the host countries and to their own people in their home countries.

The objectives of the Convention are the following:

And to introduce the missionary views of Asian leaders to the world.
The Convention Committee invited delegates and guests according to the following:

From November 11-15, delegates and participants presented and discussed their papers containing their experiences, opinions, and thoughts about Migration. Many were delighted because of the new missions strategy the Lord provided to reach the migrants, immigrants, refugees, asylum seekers and foreign students and workers within the comforts of their home countries. Others were inspired to go home tucked with new ways to reach the lost, those who were misplaced and fleeing for safety in other lands and maybe found in the homelands or mission fields of missionaries and Christian believers.
After five days of presentations, discussions, fellowships and worship, we believed that AMA 13th Triennial Convention accomplished its goals! We look forward that those who participated will find their ways to share God’s Holistic plan for those who are parts of migration and diaspora.
In the morning of the 15th of November with over 100 delegates and participants, together we pledged to the AMA Declaration. And with that, the 13th Triennial Convention of AMA came to a close. A new set of AMA officers have been appointed to serve for the next three years and prepare the 14th Triennial Convention which will happen in Jakarta, Indonesia thru a co-hosting partnership with Mawar Saron Church headed by Dr. Jacob Nahuway, AMA Honorary Chairman. All the delegates prayed and hoped that we will see each other again in 2022! 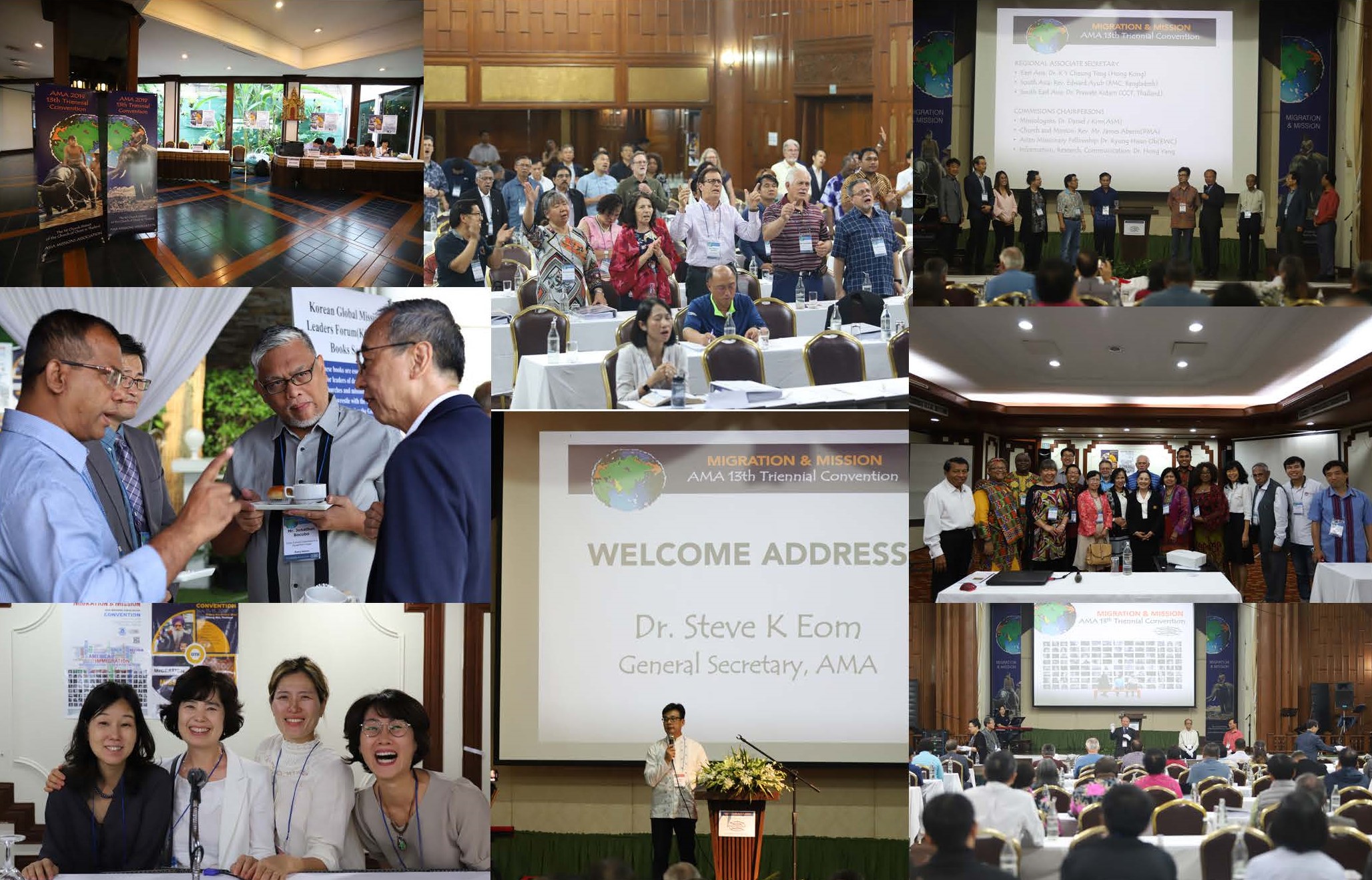 DECLARATION OF THE 13TH TRIENNIAL CONVENTION

We know that God created and reigns over the heavens and the earth and everything in it. He has a special plan to redeem humanity and all creation through our Lord Jesus Christ. He gave us His Great Commission, so we as His co-workers should propagate the Gospel of His Kingdom to all peoples in the power of the Holy Spirit.
Today the global contexts are rapidly changing. Migration is one of the phenomena of the 21st century. Kingdom workers need to take this development seriously to communicate the Gospel effectively.

We hereby declare the following convictions:

We also make the following observations and commitments:

Conclusion:
In response to today’s phenomenon of migration, we call on all Christians, including all kinds of migrants to be faithful witnesses of Christ from everywhere to everywhere!